#67. Track down a racer who has handcontrols in his racecar – Tick!

On Sunday 27th May 2012, I headed down to Lakeside Park Raceway (north of Brisbane, Qld), for what was going to be a great day of motor racing – the last day of the Qld Racing Drivers Championships 2012 (Rd 2).  Little did I know what a magical day it was going to be for me…a dream realised….

On arriving at the track, listening to the cars warming up and being worked on, smelling the fumes in the air, and looking out onto that track, I immediately felt ‘at home’ – motor racing is a passion of mine, and I just love being surrounded by anything to do with it.  My family raced when I was growing up, so it is literally in my blood.   Motor racing was also what started this whole ‘bucket list’ adventure in my life…having that come true for me in August last year, is still what drives me today (excuse the pun…haha)

Chatting away to the team (a friend is on the medic team who were based at the track that day), and looking forward to the day unfolding…I was then asked – “Did you want to go for a ride in the Chase Car?”….you BET I did! haha..I climbed into the backseat of the V6 Turbo Falcon beast, so excited….this is something new, something I didnt expect was going to happen.  We started off fairly slow, (but it was still exciting to be on the track, in the car!), and then…the driver planted his foot and we were OFF!!  It was AWESOME!! Not quite as fast as the racers around the track…but still a buzz, all the same.

Arriving back at the pit area, the days racing starting to unfold….I then had the biggest surprise landed on me…I found out that there was a racer with a disability (in a chair) racing that day!  “What??” I could not believe it.  It has been a dream of mine for YEARS, to get to meet a racer with a disability…someone doing what I missed out on doing growing up, when my family raced….the thing that is in my blood, and my spirit, to do.  And here I was thinking that this day was magic enough, just being there at the track. 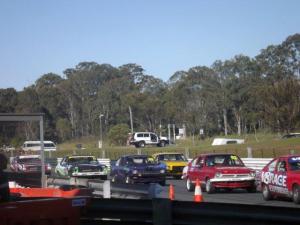 The old beasts lining up on the grid

After being told what colour/type car he was in, I then headed further down the pits area, on a serious mission….to track down this racer!

Stopping along the way to admire/drool over various other race cars, I then looked over, and what do I see, but a little blue and yellow beast (Toyota Celica), with a guy in a wheelchair sitting in front of it.  Wow…this was the moment I had been wanting for literally years…I still could not believe it.   I strolled up to him, introduced myself and told him that Id been wanting to meet a disabled racer for…well..forever.  We sat and had a great chat about his racing, his car, the handcontrols (of which I got to have a closeup look at…and to touch…wow!), and chatting about other things as well.  It was awesome.  This man (Matt Speakman), was living THE dream…getting out there on that track, in his racecar with the handcontrols, in amongst it all.  Just….awesome!  Sitting there, I was actually in awe…(and just quietly, knowing that I could actually drive that racecar, as it had handcontrols….I had to fight back the urge to want to jump in it and take it for a spin…haha…  For one, I dont have a  (racing) licence…and for two, that would be just wrong of me! haha) 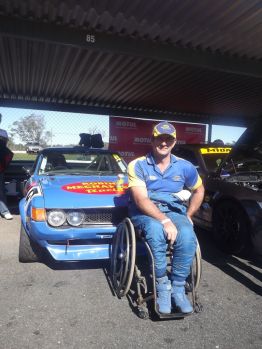 After a while, I thought I had better leave him to it….after all, he was there to race, that day!  I dragged myself away, still not being able to believe what just happened.  As I made my way back to the top of the pit area, I then got chatting to someone who came up to talk to Matt when I was with him.  I then discovered that at Lakeside (like there is at Ipswich), there is an opportunity to get my Ford out onto the racetrack!  Wow…can this day get ANY better?!?  I was given information about this, and discovered that, unlike at Ipswich (where it is much further away from home, and also not exactly cheap – but I would do and pay ANYTHING to be able to do it!), doing this at Lakeside Park was well within my budget, and not far from home at all – its something I could do in the very near future!  Bring it on!

After getting back to the area where the others were who told me about Matt, I happily shared my excitement over what just unfolded.  After not too long, it was time to go watch Matt in action, out on that track…I have to say, watching him, racing IN that car, WITH the handcontrols, ON that track…it is a feeling that I have never felt before.  Watching other racing cars out on the track, I *know* that Im unable to drive those….but this was different….this was a car that I very well could drive…this was a man in a (similar) position to myself, in a chair *but with a different disability*, and he was living what I had wanted my whole life.  Racing with Steve Johnson in his #17 Beast in 2011, took away the ‘hole’ that was in my heart from missing out on racing…but here was a man who was actually doing it…racing, with handcontrols.  But far from feeling ‘jealous’ (jealous is a feeling I just dont feel), I really admired him, and was excited for him, being out on that track…it was almost as if, when watching him, that I was racing alongside him, somehow.  I was in awe….total awe of this man, racing around track, in that car, with those controls…he had found a way to bring his Dream to reality! 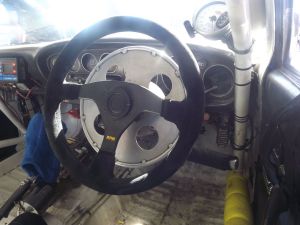 The set-up in Matts car….awesome!

Meeting Matt hasnt ‘opened up that hole in my heart’ that had healed, the minute that Steve Johnson and I got back to the Pits after I raced with him last year….it was just wonderful to see him race in the car that was just like any other car…but with handcontrols.  And more than that…it was brilliant to speak to a man who, like me…chased his dream, and is now living it.  Just awesome.

Anything is possible…in a racecar!

#70. Work/Volunteer with a childrens and/or animals organisation – Tick!