My ‘Chasing my Dreams’ life has certainly been busy in the last month or so – and its been SO MUCH FUN! 🙂   With the busy-ness of Christmas, my upcoming birthday (and a very special birthday ‘tick’ off the list!), and gearing up for what is shaping up to be an awesome start to 2014, I haven’t had a chance to write full blogs on all these amazing experiences yet – but heres a snippet of what I’ve been up to!…..

#101- Milk a Cow
Kicking it off on November 12th, myself and a friend (and her little one, which made it so much more of a cute experience!) ventured up to Maleny Dairies in the Sunshine Coast hinterland, to experience milking a cow.  Such a simple activity, but something I have never had the opportunity to do. Through a recent promotion that Maleny Dairies held, I was very blessed to be able to not only meet ‘Millie’ – but to milk her, as well.  Normally on the Tour which is open to the public (at a very reasonable price), you don’t get to milk one of the farms’ cows – if the cows were being milked by many different people during each day on the Tour, it would just stress them out – so I felt very lucky to have this experience, at this farm!  Maleny Dairies is a fully functioning farm, which produces the most amazing, and yummy products available to the public, on sale throughout the country.  If you ever get the chance go on the Maleny Dairies tour, it is so much fun, and so interactive, for the kids, as well as for us ‘big kids! 🙂   Not only were we shown various parts of the farm, the land, told some of the history, and visited the milking and production areas for their various dairy products (which we were able to sample – yum!) – we were also able to hand-feed the chickens, and also the lambs and calfs – it was just like being a big kid again!

Thank you so much to Maleny Dairies for this fun experience…and thank you Millie, for allowing me to milk you – you are SO cute! 🙂 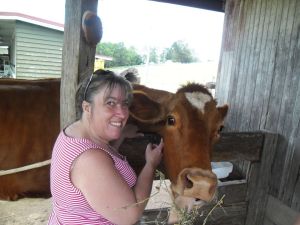 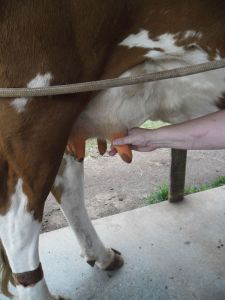 Next on the list was a very special experience, in supporting fellow bucketlister, Emma, on her very first tick off her list –
Free Hugs in the CBD!
Supporting, and watching someone else do something which they’ve always wanted to do, is such a special experience – I know how amazing it feels to experience something you’ve been wanting to do, for the very first time, and to tick it off your bucketlist – so to watch and observe someone else have these same feelings which I’ve had so many times now, through living out my own bucketlist – and to be there by their side as theyre ticking their own ‘want’ off their list – its just such an awesome feeling!

Emma is a woman who, after a simple chat recently, was inspired (and most importantly motivated!) enough to sit down and create her own list – and within 24hrs of our chat – she had created a list that was 124 ‘items’ long – yes that’s ONE HUNDRED and twenty four items long-bucketlist!  AWESOME work Emma, it was an amazing moment when you showed your list to me, after our chat only the day before! November 18th was the day Emma was to make her first bucketlist item happen, and I was lucky enough to be able to join Emma on her very first ‘tick’.  We ventured into King George Square in Brisbanes CBD, with another couple of ‘Free Huggers’, with our signs, smiles, and open arms ready for anyone who would like a hug….it was brilliant to be in the middle of the city, in lunchhour (and afterwards) when people were going about their day, some of them having their ‘serious work-face’ on, but as soon as they spotted us, big smiles broke out….we had people virtually running towards us, for a hug – it was awesome!  I’d experienced gifting hugs through the ‘Hug Patrol’ a number of times….but to do a random ‘free hugs’ in the city – yep, so much fun – to bring smiles and joy to so many people – absolutely priceless! 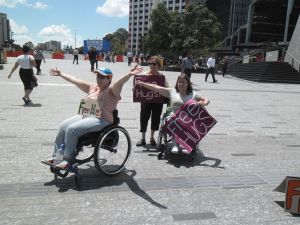 I could say more…but I think Emma has summed it up perfectly!…

“on the 18th of November I ticked the very first thing off my list officially, go to Brisbane city and give out free hugs, when i put this on my list the whole purpose of this was to give people something to smile about for the day and make them feel good, when i first put this on my list i thought i really want to do this but was not sure how it would go, but i went ahead and did it anyway with the doubts i had cause i was so passionate about it and to my surprise it was the best day!! the response and comments we go from people was just amazing!! i went there to make others feel good but instead it made me feel awesome! im always trying to find ways to help people and i went away from this event smiling for days and feeling i really made a difference to people today and that felt so good to help people like that.

it was great to cross something off my list but what i got out of this day will stay with me forever it was just magic!!”

Great work Emma…you’ve captured the essence already, of what magic can be experienced, when you simply get out there, and make it happen! 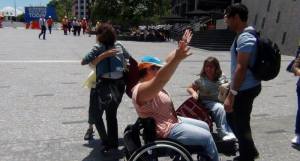 From Free Hugs – to Pistol Shooting!
Now what happened next, shows just how random this whole ‘bucketlist way of life’ is – we started off the week gifting Free Hugs – and ended the week Pistol Shooting!..haha – you simply cannot get two more different activities, from one extreme to the other   – something else off Emmas list which she decided to make happen!

November 24th, we arranged to meet up at the Sunshine Coast Shooting Club, out the back of Yandina on the Sunshine Coast, for what was certain to be another funfilled day – and it sure was! 🙂  I had been out to a shooting gallery before..but this was Emmas first time, so that made it exciting, knowing this was all new to her.

After filling in the security forms, and being briefed on the safety and mechanisms of the pistols and the Club, we were headed down to the Gallery, to join in with the other shooters already down there.  Donning our safety goggles, and lots of laughter and smiles being shared…it suddenly got serious – we had our weapons in our hands.  I don’t know about Emma, but the very first time I held a pistol in my hand (at the gallery I visited and shot at last year) I suddenly became very intimidated by what I had in my hand – I realised the absolute full power of what I was holding – it was awesome, and a little daunting at the very same time.  We ended up shooting 50 ’rounds’ of ammo – the moment when you get to go up to the target and check out how well you did…love it…!  I didn’t do as well as I shot last year (that day, I shot 3 bullseyes first up! haha)…but as for Emma…she did amazing – she’s a mean shot, is Emma! haha 😉

Thank you once again Emma for allowing me to be a part of the magic of ticking things off your bucketlist – it was not only so much fun to be there joining in with you, but to see you experience the joy of making it happen through your own efforts – just brilliant!  Cant wait to see what you have lined up next!

I had absolutely no idea of the long process it has to go through before you actually have your finished piece – theres the creating the actual piece (which can take a very long time, depending on how detailed your creation is), then you glaze/underglaze (paint with colour) it…then you fire it (and sometimes you have to fire it twice – Im not sure exactly why, but apparently that’s part of the process).  But, then theres the special day when your creation comes out of the kiln for the final time, and you can enjoy (and be proud!) of what you’ve created with your very own hands and imagination.

What I’ve also discovered about pottery is, what you may originally have in your mind that you want to create….isn’t necessarily what ends up being created.  Its interesting how it starts off as one thing…and all of a sudden you find that theres something completely different, in your hands!  My first creation is ‘meant to be’ a beach-themed vase – I had certain colours, shapes, textures in my mind for it….and I haven’t actually seen the finished product yet – but here is a photo that Ive seen of it…(its the bright blue tallish vase, in the middle of the picture).  So excited to see the finished product, for real…and I will be seeing it tomorrow! Yayz! haha 😀 I am so proud of my little creation! It took many months to create, from the original moulding of the clay, till the end of the process…but finally, its done!  My next creation is ‘meant to be’ a potplant holder….lets see what it actually turns into! 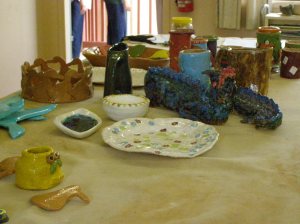 Some of the groups finished products – including my little blue vase in the middle….awww….so proud of my little vase! haha 🙂

So, that’s what has been happening the last month or so, in my ‘Chasing my Dreams’ world – and with only 13 days left in the year, I still have two more ‘ticks’ off the list, planned before the year is out!

What dreams are YOU Chasing? 🙂

Is taking part in “Free Hugs” on your bucketlist? Nows your chance! :)

New Fitness Goal added to the List..and its a biggie! :D